If you enter the Margraten War Cemetery you see endless rows of white crosses and David stars. The cemetery is well preserved by the American Battle Monuments Commision. About 250.000 people visit the cemetery each year to remember our fallen heroes. Heroes who are responsible for the fact that the Dutch people live in peace for over 70 years.

In Margraten 8301 US soldiers are buried. Also 1722 names of solders which went missing in action can be found at the “wall of missing” near the entrance of the cemetery.

In 1945, just after World War II, the Stichting Adoptiegraven Margraten was founded. This foundation has arranged that all graves at Margraten are adopted. The people who adopted these graves are for instance locals en schools which visit “their” grave regulary and law flowers now and then.

In 2014 me and my father adopted the grave of Staff Sergeant Charles V. Richey. Richey’s grave is situated in “N”, area near the flagstaff. 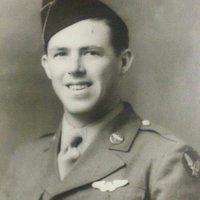 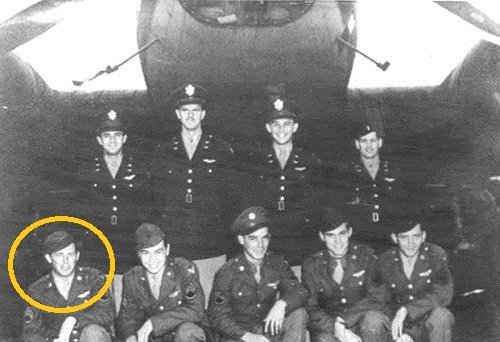 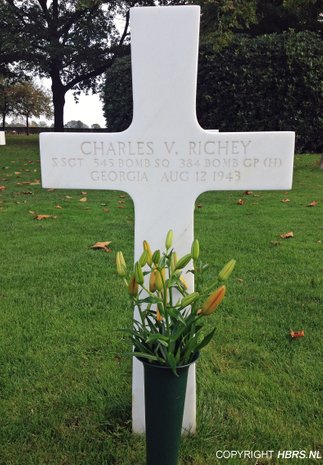 Richey died on the 12th of august 1943, only 22 years old. Charles Virgil Richey was born in 1921 and his hometown was Ben Hill County (Georgia). His parrents were John H. and Elizabeth Richey. Charles was a sales clerk when he enlisted on the 3rd of july 1942 at Fort McPherson in Atlanta, Georgia. Richey was single and had no children.

At this day the B-17F-25-VE Flying Fortress bomber with serialnumber 42-5806/JD:Z departed from Grafton Underwood to bomb targets in Gelsenkirchen and/or Bochum, Germany as part of a group of 183 B-17’s. Richey was a wastgunner onboard this B-17 of the 545th Bomber Squadron / 384th Bomber Group. While flying in the direction of Gelsenkirchen the B-17 was hit by flak. After the B-17 left formation the B-17 was attacked by Luftwaffe fighters. Some crewmembers managed to bail out before the B-17 exploded and crashed near the village of Wollmershofen-Heidgen, near Bonn (Germany).

The Missing Aircraft Report tells that Richey was last seen putting a parachute on his fellow crew member Sorbo.

The following crewmembers did not survive the crash.

The four vicitims were buried one day later at the cemeteries of Witterschlick and Bornheim. After the war Richey and Swank war buried at Margraten. Johnson was transported back to the US and buried at Restland Memorial Park, Dallas (Texas).

Second Lieutenant Newel E. Perkins was a prisoner of war and was detained at Stalag III until 1 january 1945, when the Germans started marching them east ending up in Moosburg. Newel E. Perkins deceased in 2016, 97 years old.

After Charles was reported missing in action the following article (screenshot provided by Laurie Ann Bagley) was published in a local (US) newspaper.

The two pictures below (provided by Laurie Ann Bagley) were recieved by Charles family after he passed away. Charles probably took these pictures during his time in Europe. 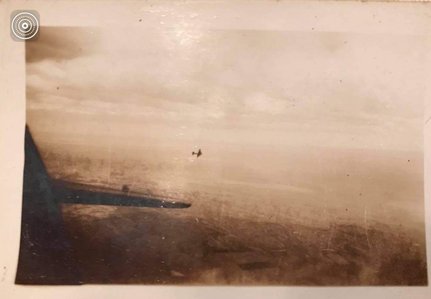 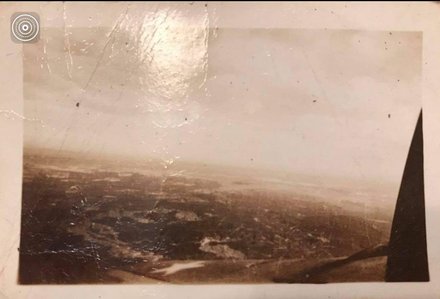 THE LAST DAY OF CHARLES

Mr. Jack Brady, a family member of Newel E. Perkins, did some research as well about the 12th of august 1943 and wrote the following part about this day:

"Almost two weeks passed before the next mission. That was more than twice as many days as it had taken the crew to fly all of their first five missions. It was a Thursday, the 12 of August.

The pre-mission routine was like all the others. When they arrived at the plane they checked their guns, loaded up and took off, forming up with the 545th, then the rest of the 384th.

They flew as the High Group of the 103rd Combat Wing that day.

They were back in their own plane, the one they had flown to England from Salina, Kansas. It had been repaired and was as good as new. They were headed to Gelsenkirchen to bomb a Synthetic Fuel Hydrogenation Plant.

When the 384th landed back at Grafton Underwood that day, B-17F 42-5806 was not with them. It was burning. It had exploded in mid air and plowed into a field, landing on a shed, behind a house in the village of Volmershofen, Germany, about five miles southwest of Bonn. One of the wings and a couple of machine guns landed in the garden of another home. The lifeless bodies of two crewmen were still on board.

On the way to the target, in the mid-morning, they were hit by flak, a heavy barrage, and the plane was seriously damaged, losing the right outer engine, but still flying. They were slowed dramatically by the damage, and fell out of the formation, dropping back from one formation to another, until there were no more formations left to join. Now they were flying alone and vulnerable. Uncle Newell dropped their bomb load to lighten the plane and they turned back, trying to cut across Sweden, hoping they could make it to the North Sea. If they couldn't, and they made it to Sweden they would be interred there, for the rest of the war. That sounded a lot better than a German POW camp.

It wasn't long before the German fighters found them. They were attacked and the crew fired their guns, desperately trying to defend them selves and their ship, but the !90's came from everywhere. There were too many of them... As they battled on, the ball turret guns fell silent, Carl Johnson had already been badly injured or killed, by fire from one of the fighters, they figured. They couldn't raise him on the airplane's communication system, which had been knocked out by the flak, and his guns were quiet and still.

With the ball turret out of operation the fighters began attacking the plane from underneath. There were no guns that could be turned far enough to challenge them from that direction, now. They flashed through the formation firing their cannons and machine guns. More fighters coming than guns to challenge them and more damage caused by each attack of the much faster, and powerfully armed fighters.

The left waist gunner, Peter Sorbo died next. He was a replacement that day, for Smith. He died standing ankle deep in 50 caliber casings, from firing at the fighters. He was hit by a 20 millimeter shell in the neck. Charles Richey was desperately trying to help his new friend, even though he was probably already gone. Charles was last seen, seconds before the plane exploded, trying to put his own parachute on that 18 year old boy.

The plane was too damaged to fly much longer, and Bob Swank order the crew to bail out, as he sat at the controls, fighting to keep it in the air. Smoke streamed behind them, and they knew they were on fire.

Jerry Kosse, the top turret gunner, hit a Foch Wolfe 190 that was attacking at an angle to the tail. That fighter dropped away.

Seconds later, Bill Hoffmeyer, the Co-pilot tugged on Kosse's pant leg and told him to bail out, they weren't going to make it. Jerry headed toward the bomb bay, thinking the bomb doors would be open after they had dropped their load, but, when he opened the door between the cockpit and the bomb bay, there was a solid wall of impassable flames.

Bill Hoffmeyer opened the small hatch in the floor, directly behind the cockpit and bailed out, Harold Bolen, the Navigator, went out right behind him. Now it was Newell's turn to go and he placed his hands on both sides of the hatch. As he started to pick up his feet to go through, the plane flipped over and violently pitched nose down. He was thrown into the bubble canopy, where his duty station had been.

He was trapped by one of the twin thirty caliber machine guns he used to fire at the fighters when they attacked. The front of his body was pressed against the canopy, with no hope of extricating himself. The twin thirty caliber machineguns had him pinned in his right buttock. The gun had cut deeply into him when he was hurled into the front of the plane. His body probably hit the Plexiglas with such force, that it flexed enough for his pelvis to slip between the canopy and the gun. When the plastic snapped back it drove the machine gun into the tissues and muscle of his backside. He figured he was on his last ride, and it would be just another minute before his turn to die would arrive.

The next thing Newell knew, he felt like he was floating. Confused and disoriented he struggled to make sense of his situation. Then suddenly it came to him, "Holy God, I'm flying through the air!", he thought. Struggling to clear his head, he remembered his parachute. He reached up and pulled the rip cord. A couple seconds later he heard a fa-wump, and felt his body snap tightly in his parachute harness. About three seconds after that, he landed flat on his back in a freshly plowed garden."

"The four victims, ball turret gunner, Carl Johnson, pilot, Bob Swank, and flexible gunners, Peter Sorbo and Virgil Richey were buried one day later at the cemeteries of Witterschlick and Bornheim. After the war, Richey and Swank were reburied at the beautiful Margraten Cemetery in the Netherlands.

Mr. Richey's grave has been adopted by a family from the Netherlands. The elder Hoebers, (first name)Lars father had expressed the great gratitude he and the Dutch people, had for the Americans who came to Europe, to join the fight against Hitler's Third Reich. He ingrained those feelings of gratitude in his son, Lars, from the time Lars was a young child. They adopted the grave after they learned that (Lars father) had been diagnosed with cancer.

His father(Piet) has passed now, but the Hoebers family continues to attend the grave of their "Uncle Charles", as if he were, truly a member of their family. I was very touched by the kindness Lars extended to me after I contacted him. My research for this project led me to his web site, and I contacted him, trying to learn all I could about Uncle Newell's crew."

I have used the following sources doing my research:

I would like to thank the following people for their assistance and information:

I am still busy doing request about "our" soldier Charles V Richey.

- more about Charles V. Richey as a person,

- if any of the surviving crew members are still alive,

- the exact location of the crash near Volmeshoven-Heidgen

- if there is any picture op the B-17 involved in the crash.

If you can help me with one of these questions, please send me an e-mail at info@hbrs.nl.

Via the following websites more information can be found:

Major Ginn was only 32 years old and was "Killed in Action". Major Ginn came from a wealthy family of lawyers and landowners. He attended Brighton Collega. Before the war (from 1938) Major Ginn worked at the (family) law firm Ginn & Co Applicors in Cambridge.

Samuel is the son of Dennis Barton (died 1938) & Dorothy Ruth Ginn (died 1971, maiden name Brooke) from Cambridge, England. Samuel was the husband of Phyllis Estill Ginn (maiden name Mason) from Diss, Norfolk, England. They were married on July 17, 1937 in Trumpington. Phyllis died in Scotland in 1998.

Major Ginn was fatally hit by a shrapnel in the head while in the 7th Seaforth Highlanders headquarters after Blerick's rescue operation.

Major Ginn was buried for some time in a fieldgrave on the corner of the Peelstraat and the Americaanseweg in Kronenberg. On August 12, 1948 Major Ginn was reburied in Venray. 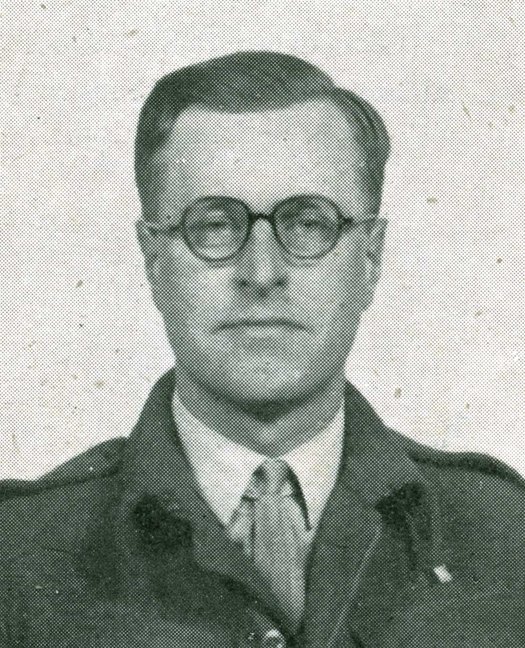